La egg festival started on Animal Crossing New Horizons! From March 28 to April 4, 2021, Lapin Albin has hidden Eggs all over the island and it's up to you to look for them and recover them!

Thanks to the hidden eggs, you will be able to create different objects related to the theme of Easter and egg festival, by recovering diy blueprints. These objects range from meubles, to clothing going through decorations !

It exists in all 6 different types of eggs that we have detailed in our dedicated article. There are therefore: the terrestrial egg, the aerial egg, the mineral egg, the leafy egg, the woody egg and the aquatic egg. All of them will be useful to you in different DIY plans, be careful not to neglect any of them!

Also, Albin the Rabbit promised you a cadeau if you succeed in find et craft all items on the theme of egg festival ! 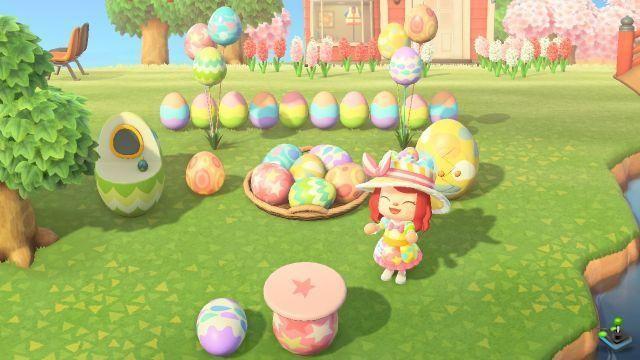 If you manage to collect a large number of eggs for a same type of egg, your character will think of diy blueprints and you will unlock DIY plans related to the type of egg in question. So you can make a pair of shoes, the shell and tenuous on the pattern of the egg in question!

You can find Egg Festival-themed DIY blueprints in different locations and performing various actions. Here is the list of the different possibilities:

To obtain these DIY plans, you will need to find all the DIY plans of others clothing.

For each of the 6 different types of eggs, your character comes up with DIY plans by collecting a certain number of eggs. You can then make: a pair of shoes, the shell and tenuous in pattern of collected eggs. Once the diy plans are unlocked, you then access the following diy plans:

On April 4, Albin the Rabbit will return to your island. He will give you a plan to create a egg festival ark ! You can also exchange 3 eggs of the same type contre an egg of another type.

Also, if you give him an egg of each type, he will give you a Egg festival basket.

If you have managed to collect and craft all the items " egg festival (excluding clothes), Albin will give you a plan to make a Albin's Ramponeau. Craft it then return to Albin. As a final reward, he will give you a blueprint for a egg festival wand. As with the Star Wand, this wand will allow you to change your outfit in a snap!