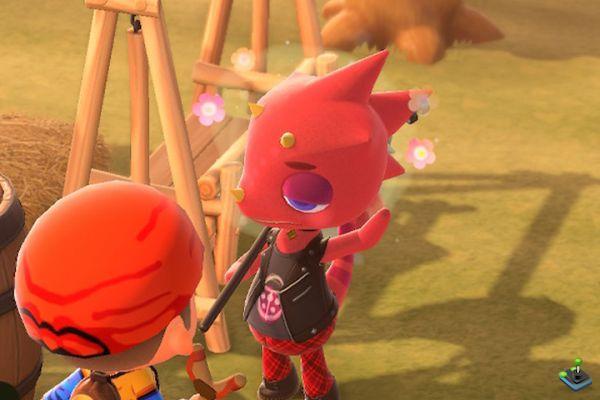 Animal Crossing: New Horizons is full of surprises, and among them, many special characters will regularly come to your island! One of them is called Djason, and is particularly fond of insects... Find out more about this rather special character!

Regularly, froms special characters will come to visit you on your island. These characters are NPCs who will never move into your home, but can be communicated with. Usually these have a "quest" for you, which you can complete until they leave. But that's not the case with Djason, a red chameleon with several horns on his face !

This character has the particularity love insects very much. So much so that if you sell them to him, he will buy them from you. much more expensive than if it were at the Nook Shop! For the tarantulas for example, he'll buy one from you for 12 Bells, compared to 000 Bells at the Nook Shop.

If you capture 3 identical insects and you bring them to him, he will make them a statue that he will give you. You have surely understood the idea: when Djason is passing through your island, arm yourself with your net, and catch as many insects as possible. Do not hesitate to visit the mystery islands, to hope to come across a tarantula island.

On certain dates, Djason will organize insectafaris. These are insect hunting contests, which allow you to obtain various rewards from the lizard!