Call of Duty: Vanguard/Warzone: When does Season 2 start? 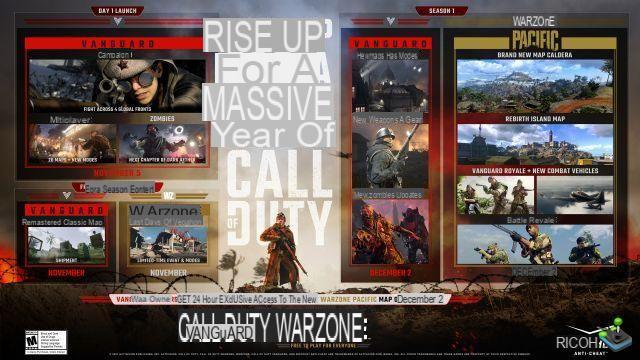 Although we are still in the middle of Season 1, many players are wondering when Vanguard Season 2 will arrive, which will also mean changes for Warzone. Update of 19/01: The launch of the update has been postponed for a few days, since it is now scheduled for February 14, 2022. You will find more information in this article. As for the last episodes of the Call of Duty license, Vanguard adopts a seasonal system for adding new content, which obviously has repercussions on Warzone, the battle royale which has been drastically modified with this new episode, since it has had a new map, Caldera. Whether in one or the other of the games, the players were there and particularly appreciated the new features. Given that the latter arrive in particular at the start of the season (but also during the mid-season update), many are those who are wondering when does vanguard and warzone season 2 start, to enjoy new content.

When is Vanguard and Warzone season 2 release date?

Knowing that season 1 has an end date scheduled for February 1, according to the information given by the battle pass, it is easy to imagine that Season 2 will begin on Tuesday, February 1, In the evening. Activision does in fact have the habit of deploying its updates on Tuesdays, at the end of the day, or even, in some cases, on Wednesdays.

Naturally, Activision and Sledgehammer will tell us more in due course, as we get closer to the end of the season, but while waiting for a final release date, expect to see land season 2 on february 1, although a small lag may occur, if ever the developers encounter a small problem.

This season 2 should normally bring new maps, new weapons and new modes. Again, we will have to wait to learn more, but according to the habits of developers, here is what we should expect, at a minimum.

Note that the article will be updated over time as more specific information is shared.

add a comment of Call of Duty: Vanguard/Warzone: When does Season 2 start?