Public chat Clash Royale, the 5 tips are regular articles that will give you additional keys to better play the title of Supercell. They are focused on one unit and are recommended for beginners, but can be a source of inspiration for everyone. For this 9th issue, we are going to focus on an emblematic card, available from the start of the game in arena 1, the one that gave its name to the "Log/Zap Bait" style of decks: the Goblin Barrel. 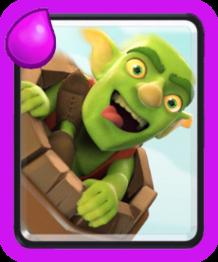 1. Le Goblin Barrel is, with the Graveyard, the only spell that can generate units and that you can place anywhere on the map. The main difference is that the Goblins appear immediately after the burst of the Cask while the Graveyard generates Skeletons, within a perimeter for 10 seconds. Moreover, this particularity contrasts with the Skeleton Barrel, where the units are not available immediately after the Cask is broken.

2. Make good use of the Goblin Barrel requires varying the area where it is going to be placed. It is not uncommon to use a spell to counter it and often it will be used as a reflex, in particular The log, because of its width. When we take this into account, we can place the Cask at the very bottom of the map, to trap the opponent and thus make him spend a spell for nothing. The arrows are also a useful counter.

3. The log remains the best spell against the Goblin Barrel, as it is the easiest to use to gain a benefit from the elixir. About the Zap, it must be of the level above so that the Goblins die in one hit. Therefore, in Tournaments mode, if your opponent against your Goblin Barrel this way, you are guaranteed to have damage on his Tower, every time.

4. La Tornado is very useful against Goblin Barrel, because when it is well placed, you can, at least, force the activation of your King's Tower. Used well you can even manage to take no damage, as we showed you in the 11th issue of the "Funny compilation".

Tornado Goblin Barrel to king without it getting any damage! (Made by Hazard) from ClashRoyale

5. Le Goblin Barrel can be used to counter certain enemy buildings, such as the Hell Tower (force focus) or theelixir extractor (demonstrated by Orange Juice). Admittedly, they do not have the life points of the Minor, far from it, but can be particularly annoying.

add a comment of Clash Royale: 5 tips on the Goblin Barrel