Author and references
A Reddit user recently posted a so-called screenshot from Amazon Germany, which reveals a release date for Elden Ring, on PlayStation 5. Obviously deleted since, it is strongly possible that it is false, even if the thesis of a gross error emanating from Amazon, customary of the fact, cannot be ruled out. 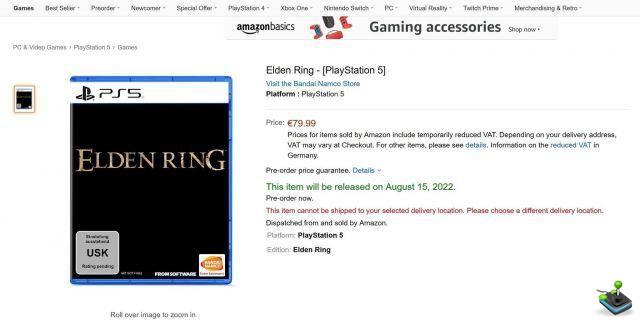 Why the leak can be fake? Quite simply because the date indicated, August 15, 2022, falls on a Monday, and that almost all games, especially when they're this big, come out on a Tuesday or Friday. Also, even though studios and online retailers sometimes use dummy dates before an announcement about the release date, the release date is relatively far off, which may raise some questions. The hypothesis that the published image is false is also possible.

However, it is also not impossible that Amazon has, once again, made a mistake when entering data and made public the release date of Elden Ring on PS5. The title, developed by FromSoftware, could arrive later on next-gen consoles, which may explain this distant launch.

Unfortunately, we will have to be patient before knowing more, since Hidetaka Miyazaki and FromSoftware are not very talkative for the moment. If some information, or rather details have recently been shared, Elden Ring hasn't shown itself since E3 2019, when it was made official. The COVID has, perhaps, delayed the plans of the developers, and therefore the release, which is, to date, no longer expected with 2021, except for an incredible turnaround.
The Witcher 3: The next-gen update postponed to 2022 ❯

add a comment of Elden Ring: A 2022 release appears on Amazon, probably fake