Guide: Shadow of the Colossus PS4 Boss Guide - How to Find and Kill All 16 Colossus 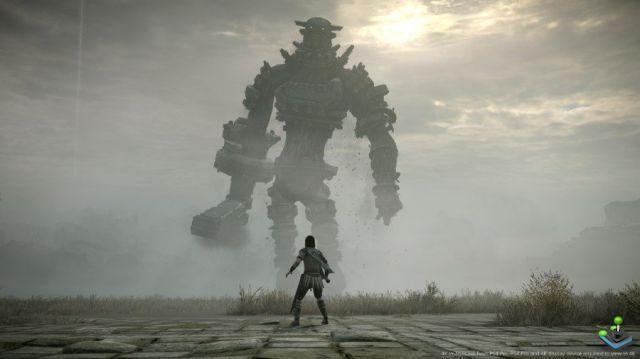 How to find and kill all 16 colossus in Shadow of the Colossus on PS4? They're the beating heart of Bluepoint's brilliant remake, and in this boss guide, we'll not only help you find all 16 Colossi, but we'll also share some strategies on how you can kill them, too. Whether you're looking for tips, tricks, or tactics, read on to help lead Wander to victory as he mounts a siege on the Outlands.

Colossus 1 in Shadow of the Colossus is also known as Valus or Minotaurus Colossus. This is more of a tutorial boss fight as the game teaches you how to master the game's unique combat mechanics, but beating it will unlock it Wanderer's Valley Trophy. 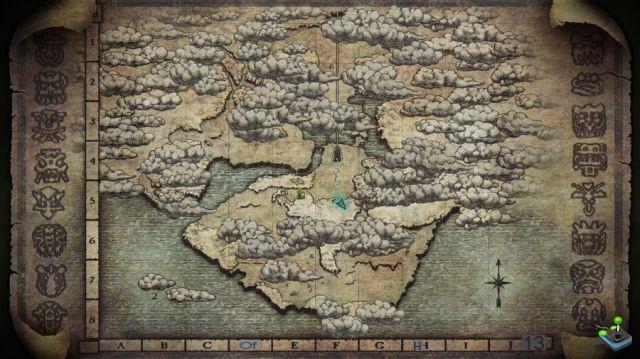 Where to find Colossus 1

If you don't know how Shadow of the Colossus works yet, raising your sword above the terrain will open a beam in the direction of the next boss. You just need to follow this beam to find your prey.

In the case of Colossus 1, head south from the bottom of the temple steps. You'll eventually come to a small platforming area that teaches you the basics of navigation in Shadow of the Colossus. Once you've successfully climbed through the small cliff area, you'll emerge into an open field where Valus will strut before you. 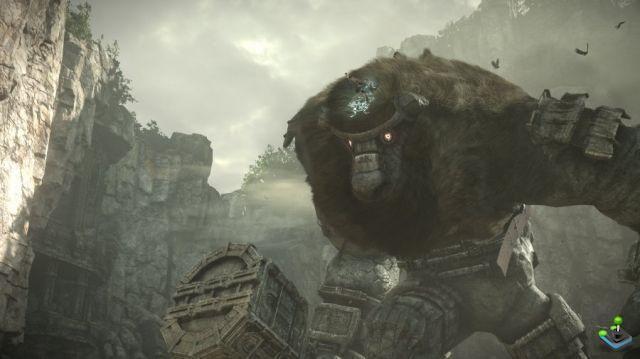 How to Kill Colossus 1

Just like you used your sword to head into Colossus 1, you can also light up all the bosses in Shadow of the Colossus to see their weak points. By doing so, Valus will reveal a small patch on the back of his left leg. Run up to him and grab the fur, then stab the light panel with your sword, holding the square button to raise your hand, then pressing again to push forward.

Valus will stumble, allowing you to climb up his leg and onto the platform above his loot. Rest here if you need to recover your stamina before climbing Colossus 1's back and running over its shoulders over its head. He will struggle so make sure you keep holding on (you can retreat to his shoulder area if you need to regain your stamina). Keep stabbing the panel on his head until Valus goes down.

Colossus 2 in Shadow of the Colossus is also known as Quadratus or Taurus Magnus. In terms of scale, it ups the ante on Colossus 1, but it's still relatively simple to send once you learn how to deal with it. Killing him will unlock the the mammoth Trophy. 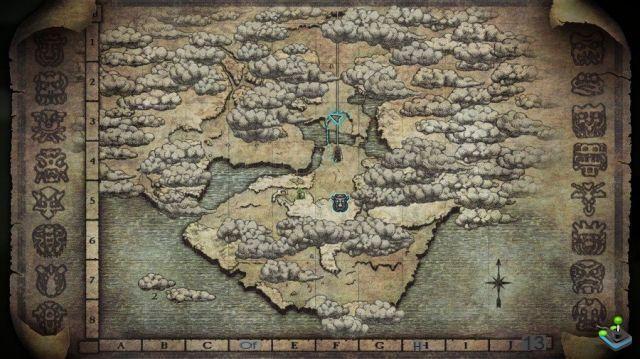 Where to find Colossus 2

This time you are going to want to go north. Go down the temple steps and board Agro, then climb directly behind the large building. You'll come to a canyon with a bridge facing due north, so cross it until you see a cutscene. Follow the path down into the canyon then turn right at the bottom and trace the inner wall. Below the bridge is a cracked piece of wall and when you approach it, Colossus 2 will smash it. 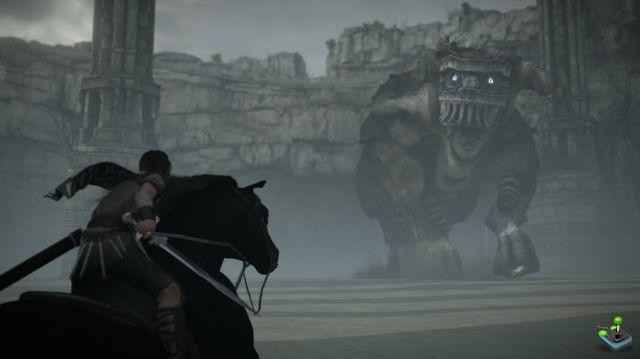 How to Kill Colossus 2

Although this beast looks big, it is easily beaten. Colossus 2 will try to stomp on you with your front feet if you're standing in front, and that's basically what you're going to want to do. Switch to your bow and wait for him to lift those giant hooves off the ground, then stick an arrow down his foot. It will drop to its knees, allowing you to climb.

Once you're up, walk through Quadratus' spine and grab his head. Again, remember to hold on when he struggles so you don't get rattled. Backstab the weak spot in his head until it disappears, then back down his spine to the back. There's another sign right next to his loot, so stick your sword in until the boss fight is over. 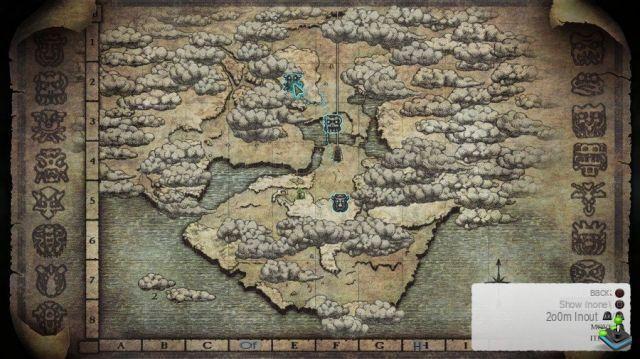 Colossus 3 in Shadow of the Colossus is also known as Gaias or Terrestris Veritas. He is arguably one of the most iconic bosses in the game due to his scale. Defeating him will unlock the Awaken the Knight Trophy.

Where to find Colossus 3

Just like with Colossus 2, you'll want to take the northbound bridge that's behind the temple to find Colossus 3. Instead of going down the path into the canyon, keep crossing the bridge to exit into the desert area.

Gaias is a little harder to find as the beam of light can be deceiving. Essentially, once you leave the bridge, you'll want to head northwest to an outcropping of mountains, but don't go too far west or you'll end up in the wrong area. There's a path between the mountains that leads you to a lake, so jump into the water and swim to the arched path that leads uphill. Navigate to the large oval platform and run towards its center to awaken Colossus 3. 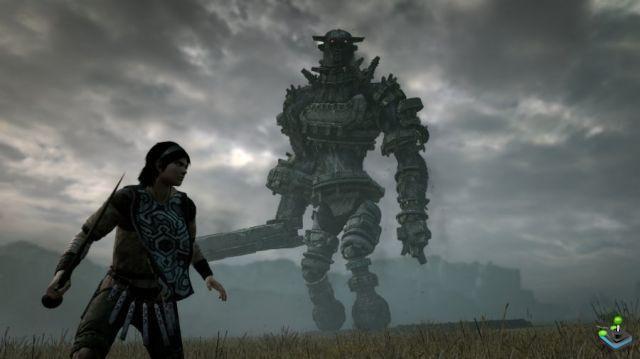 How to Kill Colossus 3

It's a bloody big boss fight, so be sure to use L2 to keep Colossus 3 in your camera focus. To start this battle, get Gaias' attention and run to the edge of the platform. Make him follow you using arrows if he is stubborn. He'll stomp on you if you're too close or swing his big sword if you're a little further away.

Once he's outside the platform, go back to the center and stand on the small platform in the middle. Get his attention again and wait for him to swing his sword. Jump off the platform and wait for the sword to bounce off the platform. This triggers a cutscene showing Colossus 3's armor being damaged. You now have a route over his head.

Have him swing his sword one more time (this time into the grass) and dodge the attack. Now climb on the sword while it's stuck in the dirt and hold R2 to hold onto in case he shakes you. Once he's stable, grab hold of Gaias' fur and climb onto his head. Backstab him until the weak point disappears.

With that done, drop his back and onto the platform surrounding his mid-riff area. Be sure to pause for a few seconds to recover your stamina if needed. Then run around his belt to his belly, climb on the fur and stab the weak spot until he dies.

Colossus 4 in Shadow of the Colossus is also known as Phaedra or Equus Bellator Apex. It's one of the few forgettable boss fights in the game, but it's still an interesting fight as it forces you to use your wits and the environment to defeat the enemy. Killing him unlocks the land of tombstones Trophy. 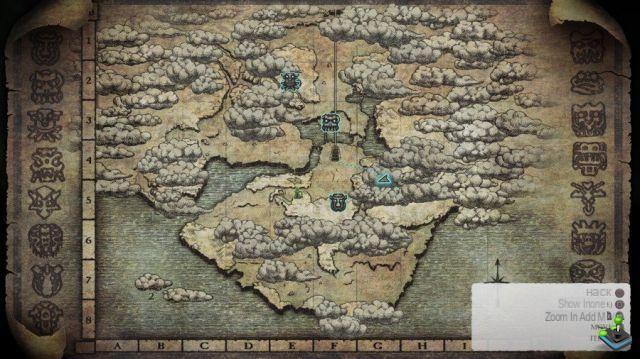 Where to find Colossus 4

To find Colossus 4, you need to head southeast out of the temple. Try not to go too far south, you mostly go to the left of the bottom of the temple stairs; follow the beam of light out of your sword for the exact direction. You will ride in a dark mountain pass which is quite linear and easy to follow. Exit into the valley and follow the area until you come face to face with the Colossus waiting at the end. 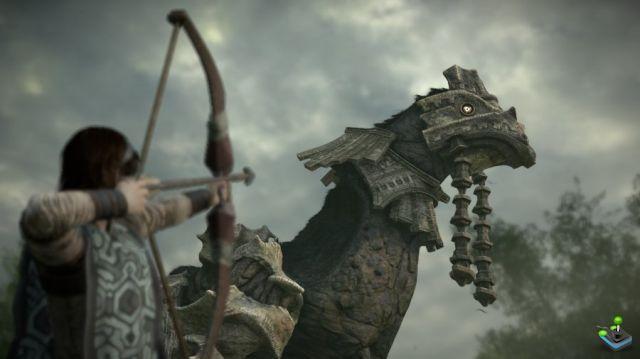 How to Kill Colossus 4

Colossus 4 isn't a tough fight, but it can be frustrating. It basically depends on what you were asking the AI ​​to do what you want it to do, so those of you who clenched your fists at The Last Guardian may be irritated by this one.

Basically what you need to do is lure Phaedra to the trenches area in the middle of the valley. Use arrows to get his attention. What you want him to do is follow you to the top of one of the four trench entrances. When he comes to stomp on you, climb inside the trench and wait by the door. He'll start stomping around trying to get you out, and this is your chance to run into the trenches, take an alternate exit, and get out.

When you exit, Colossus 4 still thinks you're inside, letting you jump on your back. Backstab him in the neck to knock his head down, then climb onto his bonce. Keep stabbing the weak spot until the suction cup collapses.

Click on the next page for our Shadow of the Colossus boss guide. The following page includes strategies for Colossus 5 through Colossus 8.

Audio Video Guide: Shadow of the Colossus PS4 Boss Guide - How to Find and Kill All 16 Colossus
Guide: PS5 SSD Storage - How Much Hard Drive Space On PlayStation 5, How You Can Expand GB With SSD Upgrades, And Why It's Better Than HDD ❯

add a comment of Guide: Shadow of the Colossus PS4 Boss Guide - How to Find and Kill All 16 Colossus