Paper Mario: The Origami King is coming soon to Switch 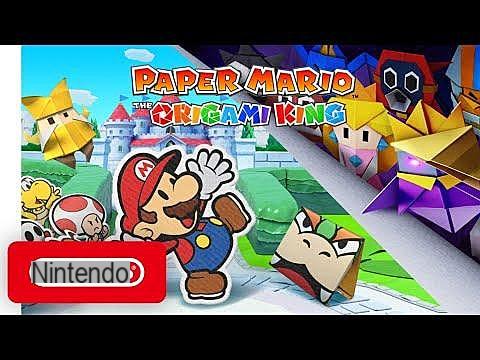 Rumors of a new Paper Mario Switch game were swirling as part of the Super Mario 35th anniversary rumors - and it turns out the conversation was right. Nintendo has released a surprise trailer for Paper Mario Origami King, which is coming to Nintendo Switch on July 17.

The Paper Mario Origami King trailer serves as a story teaser. We see Princess Peach getting an origami makeover and getting really sinister, as the crumpled plot of the mysterious Origami King begins to unfold. Bowser becomes a postcard, Peach and Bowser's castles are swept away in a flurry of strips of paper, and Mario finds himself with unlikely allies as he journeys to set things right.

Paper Mario's trademark humor also returns in full force, with a fun little VR joke at the end of the trailer involving Samus Aran's helmet (which is probably the closest thing to Metroid this year.)

Most important to mainstream fans is what looks like the return of partners alongside Mario's constant sidekick. We didn't look at the combat system much in the trailer. But the game's official page on Nintendo's website says it's a ring-based battle system where you "strategically line up enemies to maximize damage." The Paper Mario Origami King website adds to this and says that battling "requires both puzzle-solving skills and a quick wit."

A short video from Nintendo Japan (courtesy of @Stealth40K) shows the action in more detail, where enemies are on a rotating ring and your objective is to try and rotate the battlefield so your attacks do the most hits. possible damage.

Paper Mario: The Origami King's battle system is super unique. It's turn-based, but you rotate enemies on this giant wheel. https://t.co/T7vlMM9QM9

Our interest in Nintendo's summer lineup has increased tenfold with this announcement, so stay tuned to GameSkinny for more Paper Mario Origami King news coming out of the pulp mill.

add a comment of Paper Mario: The Origami King is coming soon to Switch