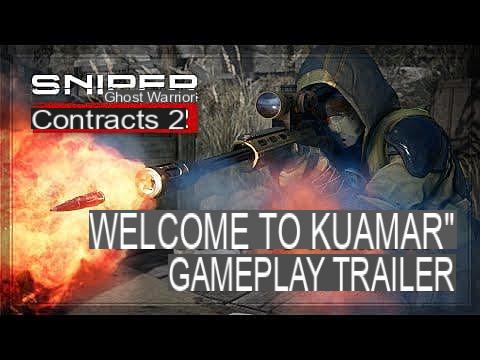 Sniper Ghost Warrior Contracts 2 aims to up the ante when it releases on most major platforms in June, taking the series' sniping and gore to a whole new level. However, PlayStation 5 players will have to wait a bit longer to fall behind enemy lines. Developer CI Games has said that the PS5 version of SGWC2 has been delayed until later this year.

No new release date has been shared outside of this 2021 window, and no other platforms have been affected by the delay. Sniper Ghost Warrior Contracts 2 will still launch on June 4 on PC, PS4, Xbox One and Xbox Series X | S.

CI Games said the team encountered "unforeseen technical issues" with the PS5 version of the game, although the release announcing the delay didn't mention what those issues were. The studio's executive producer, Tobias Heussner, hinted at an issue between the game's engine and the PS5, but didn't provide details.

We could not have foreseen these problems. However, we would like to assure our players that our highly experienced, professional and dedicated team is working hard with the platform holder and engine vendor to resolve any issues as quickly as possible, to ensure that we can bring to the PS5 community the high caliber. sniping game they've been waiting for.

Despite the disappointing news for PlayStation 5 fans, something good comes from the delay for all gamers. CI said that due to the delay, they will be making the first DLC package for Sniper Ghost Warrior Contracts 2 free for all players on all platforms. DLC details are non-existent, but the team will share more information "soon".

On top of that, PlayStation gamers will be able to enjoy a free upgrade from PS4 to PS5 whether they purchase the game digitally or physically.

We recently got our hands on the PC version of the game and came away impressed, saying, "Sniper Ghost Warrior Contracts 2 feels like the marriage of proven first-person snipers and unique experiences possible in modern games. in the open world. . "

SGWC2 is currently available for pre-order on all platforms, including PlayStation 5, for $39,99. Those who pick up the game before June 4 (or later if they do on PS5, presumably) will get access to the Marcus Tactical Rifle, FFF-45 ACP Decoy Pistol, Rock AS100 Assault Rifle, and two weapons. . skins, blue servers and warning tapes.