Author and references
Our articles on Clash Royale Clash Royale: Decks to counter the Arc-X - Arena 10 The Arc-X is a card that posed a lot of problems for the France team. How to counter this card? We have some ideas for you!

Public chat Clash Royale, if you follow the competitive scene of the game, you probably experienced the 5-2 loss of the French against Brazil in the grand final of the MGL Worlds. One of the reasons why the Samba reigned over the French Touch is a siege building: theArc-X. This card, because of its peculiarities, has been able to make its way through the meta, but has also become stronger over time. Therefore, the question is: how to counter it effectively? 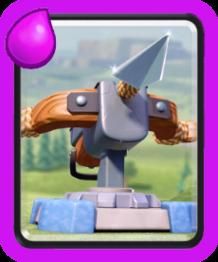 The particularities of the Arc-X

As we wrote in the introduction, theArc-X, a card with 6 elixirs which is unlocked at 800 Trophies (Arena 3), is a headquarters building, in the same way as the Mortar. Apart from the Princess, they are the only buildings capable of inflicting damage from a distance, without the opposing towers being able to touch them, which is an undeniable asset. However, they must be stuck at Bridge level and they can only hit ground units.

L'Arc-X is a prime piece in the current meta and is why the card is getting a boost in popularity. It's a card that does little damage on one shot, but with a rate of 4 per second, which makes 104 DPS at Tournament level (4), a respectable number. In addition, it is able to be used in defense (fast decks), as well as in attack and the buff of the Tesla greatly benefited him. Finally, he can counter the gobelin hut. Here is an example of a deck with the latter:

After talking about the strengths of theArc-X, what can we use to not be afraid to face it? There are different ways to do this, but we present two that are relatively simple to apply.

One of the most suitable cards to counter theArc-X received an indirect buff during the last balance: the G. You should know that if you place yourself at the Tournament level, theArc-X cannot kill it before it is destroyed. In addition, the player in front may try to put support, it will be necessary to stuff the units behind, which can quickly be too much and give you victory. For example, we can use this deck Ghost Golem ( woodcutter), which is effective in this situation and not too difficult to play:

We can also consider using a Spawner-type deck: the more diverse and varied units there are on the ground, the more theArc-X will have difficulty reaching the Tower, especially if we add a tank like the Mega Knight in the batch. If your building cycle is good and you are using your tank correctly, when theArc-X appears, you should be fine. We can choose un more exotic deck, but we offer you this one:

add a comment of Clash Royale: Decks to counter the Arc-X - Arena 10