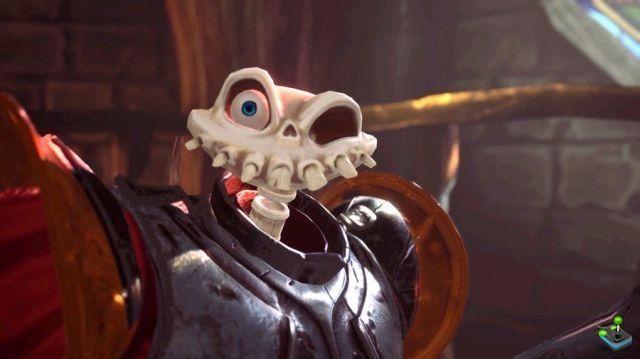 Sir Daniel Fortesque is back in business with the PlayStation 4 remake of MediEvil. Resurrected after two decades of rest in peace, Sony's chilling action adventure is making a big comeback. As with other modern remakes such as Spyro: Reignited Trilogy, MediEvil will of course have fans who want to relive the journey through Gallowmere, but there's also a whole new audience on PS4. If you're new to Sir Dan's unusual quest, you've come to the right place. In this guide, we are going to talk about all the basics of MediEvil.

MediEvil – General Tips for Getting Started

Below we go over the fundamentals of how to play MediEvil.

In MediEvil, there are two control systems. The default is a more modern layout, while the other sticks to how you would have played the game on PSone. Let's review both to help you decide which control scheme is right for you.

Sir Dan starts off with a health bar, as you'd expect, but as you play you'll find additional Life Bottles. If you take a fatal blow or fall off the edge of a stage, one of your rescue flasks will be consumed, keeping you alive and giving you a full health meter. You can recover Dan's health by standing on magical green vents or fountains on each level - there are one or two in each. You can also find small Energy Bottles that will top up your Health Bar or, if full, your next Life Bottle.

Combat is quite difficult in MediEvil. As a reanimated skeleton, Sir Dan's combat skills aren't great. So don't expect combos. Your first real weapon is a small sword, and when attacking it, Dan will just see it flailing in front of him. There's no real blocking for enemies, so just hit them with the pointed end until they fall. Of course, other weapons behave slightly differently – see below for more weapon information.

Just as important as attacking is defending, which brings us to...

It's easy to forget, but Sir Dan can equip and use shields to take hits, potentially saving his skin? Either way, holding R1 (or Triangle if you're on classic controls) will put you in a defensive stance and the shield will take damage rather than your health bar. Each type of shield has a different level of durability. Copper Shields can take 150 damage, Silver Shields 200, and Gold Shields – a special item you can acquire – can take 400 and can be repaired.

Again, it's easy to ignore your shield, but using it effectively can make it easier for you.

In addition to thwarting Zarok's undead army, you'll find hundreds of gold in MediEvil. Found in bags or treasure chests, this money is extremely useful, so gather as much as you can.

In each level you will find a merchant gargoyle. These guys are thirsty for gold, so gladly take your moolah in exchange for ammo for your unlocked guns. You can also buy back weapons you've taken and reload special gear once you have them. Be sure to collect all the gold you can find - you'll need it.

As you play with MediEvil, Sir Dan's arsenal of weapons and other items will grow. Let's go through the categories and some examples below.

Melee weapons are what you'll likely use most throughout the game. Wooden truncheons and all sorts of swords to Sir Dan's left arm, you're going to zombie like no one does.

In addition to swords and axes, Sir Dan will use ranged weapons. Starting with throwing knives and building up to powerful longbows, ranged attacks can be extremely useful, especially against airborne enemy types. The wisp flying with you will highlight the nearest villain, and it's them that Dan will attack with projectile weapons.

This inventory category contains shields and other additional protections for Sir Dan. To equip a shield, simply select it from the menu and press X. It's always a good idea to have one handy.

Items contain everything else, such as quest-specific trinkets. This is also where you can find the Book of Gallowmere, a compendium detailing every character in the game, from friendly characters to basic enemies, even bosses.

add a comment of Guide: MediEvil PS4 - Tips and Tricks for Beginners