Author and references
Our articles about Clash Royale Clash Royale: PEKKA Minor Arena Deck 11 A deck based on two complementary threats and the best cards of the moment.

Public chat Clash Royale, our deck guide, based on the PEKKA and  Minor, in particular, will help you to climb in arenas. It is based on two cards which, in their usefulness, oppose them, but which, in fact, as we will see, complement each other well. Moreover, they are combined with strong cards of the moment, making the whole coherent and powerful. This list is as good in ladder as it is in Tournaments mode.

PEKKA : Since its up last February, the PEKKA has established itself as a formidable machine for defending a lot of victory conditions, such as the Pig Rider, three musketeers and above all, at this moment, the mega knight. As it is also a weapon in counterattack, because of its enormous damage, it is one of our victory conditions.

Minor : The other victory condition. Indeed, this mini-tank, by being able to place itself directly on the opposing Tower, shines your other units, whose goal is to do damage. As a result, it is formidable on the counter, especially after a successful defensive phase, where even the smallest unit with few remaining hit points can make a difference. Also, it is handy against an Elixir Collector.

thief : Your ground sniper, simply. She is able to punish medium units that are placed alone and, when possible, she is able to do real damage to an opposing Tower. Since it's a card that can be difficult to manage and excellent in counter-attacking, its addition makes sense. Admittedly, it requires a little practice, but when it is assimilated, you will understand its strength.

Electro-wizard : A card whose versatility is queen. She is your main unit anti-aircraft, but he is also able to slow down enemy pushes, interrupt them to force them to change targets and can do good damage in counterattacks. It's one of the best cards in the game, hands down.

Goblins : Your distractions on the ground, preferred here to Skeletons. Can withstand a Zap of equivalent level, this makes it a card of choice to counter the thief (using a Tower), the Princess and, in general, avoid using a more expensive card, without taking too much damage.

Bats : Much more than aerial distractions. Indeed, they shine when another unit is focused, being able to do enormous damage in counter-attack, but also in defense. Although they are very fragile, with a little practice, you will understand their strengths.

Electrocution/Zap : Favorite here at The log, it is a card that affects air and ground units. When we don't have Poison, this card can be useful to get rid of Bats, Skeleton Army, To see the Gang de gobelins.

Poison : It has an excellent synergy with the Minor. Therefore, it is mainly used with it, during a counter-attack phase, making the opposing defense more difficult. You can also use it in defense, in an emergency or to secure victory.

Depending on your starting hand, the start of the game will be slightly different. If you have the Minor, you can use it, nature, to see what your opponent will defend with. You can make a surprise by adding, for example, the Bats (if you have them), but it can be dangerous, especially if your opponent defends well or launches a lightning counterattack.

Therefore, as long as you know how to defend or attack the opponent, use the right spells and units to defend and attack. You have to realize that the goal of your deck, since you can insure damage, is to scratch as much as possible and or the opponent's Towers, by pushing with a moderate number of elixirs.

With regard to the PEKKA, only use it in defense for when if the opponent puts down the Lava Hound (to counter). As it was written before, you now have two choices available to you, if it has a lot of life left: support it or do a split push with the Minor. In both cases, it is up to you to choose the solution that seems to you to be the best, and therefore the least risky.

Compared to the first time of the game, not much changes, except that your cycle will be faster. Therefore, it may be easier to use the PEKKA no longer in defense, but in attack. Keep scratching the opposing Towers and if your defense is good, you can toast to your victory!

Le Goblin Barrel peut problematic, because you don't really have enough to defend it effectively without taking damage. Apart from that, defensive buildings can annoy the PEKKA if she stands alone, like you too, having none of them in your deck. Other than that, be careful with heavily aerial decks and otherwise you can get away with it.

If we look at the deck in its entirety, we can replace the Zap by arrows, for a slightly heavier deck with less stun, but more effective against the first and last threats mentioned. 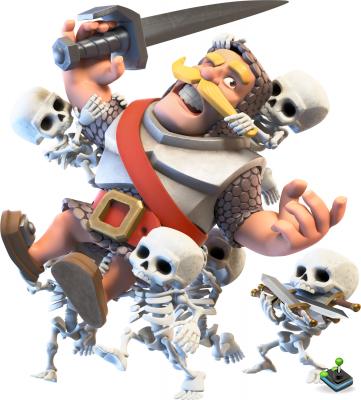