Age of Empires 4: The roadmap until mid-2022 unveiled, many new features on the program

Author and references
After a nice launch on PC, the best of the franchise, it's time for developers toAge of Empires IV to take stock of upcoming content, as promised. If a first update was deployed in mid-November to correct some problems, other updates are obviously planned, the objective being initially to correct the various problems and balance the experience. AoE 4. In a second step, minor or major content will be provided, starting at the end of this year. Let's take stock of what is expected in the coming months on Age of Empires IV.

Two updates have already been detailed in outline, and other things have been presented, without a real release window. Regarding the first two major updates, here is what was said:

During this first update, in addition to numerous bug fixes and balances of all kinds, expect to finally enjoy the score during the games. However, the feature can be enabled or disabled according to your preferences. The Chinese Dynasty button has also been moved, while the map at the end of the match will be available and above all we will be able to navigate to obtain more precise information. The mini-map will also be the focus of some improvements.

For the second major update ofAge of Empires IV, the developers will make mod support available, so that the community can use their imagination, and put their talent at the service of all. Ranked Seasons will also be introduced at this time. Lasting twelve weeks, they will allow players to compete and collect rewards according to their ranking, but also to enjoy better competitiveness.

Later in the year, we will also be able to enjoy several things, such as: 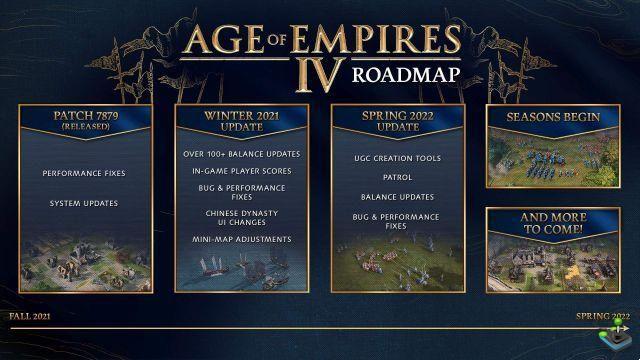 More information will be given on these updates and the various additions in due course. In the meantime, we remind you that you can consult the tier list of the best civilizations here, to give you an idea during the selection.

Age of Empires IV is available on Steam and via Xbox Game Pass. If you want to acquire it while saving some money, our partner Instant Gaming offers you:

add a comment of Age of Empires 4: The roadmap until mid-2022 unveiled, many new features on the program