CSGO: The most popular cards of the first half of 2022 revealed

Author and references
Available for ten years, CSGO remains a stronghold of Steam and one of the benchmarks for competitive FPS, despite the arrival of VALORANT. The community remains very engaged and seems to have their favorite maps. If you were wondering what are the most played cards between January and June 2022, know that an answer was given by the Leetify site.

With data from over 5,2 million games, a ranking of the most played cards is available, with a trio that emerges quite easily and without surprise. Mirage, Inferno and Dust 2 are the most popular with players by far, with 29,6%, 20,7% and 20,5% picks respectively. Thus, 70% of the games are played on these three cards, which is not surprising since they are the most known and the most balanced, although the community has been asking for a rework for some time now . 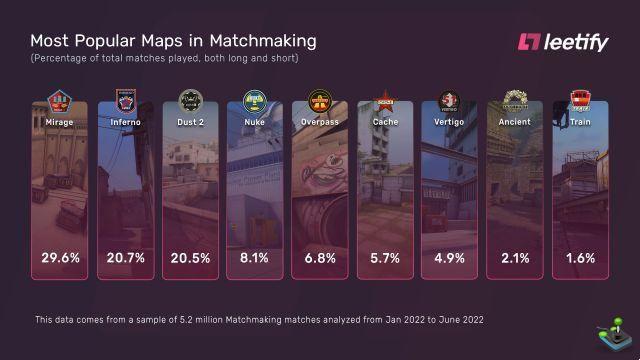 On Reddit, some players are hoping to see a change in the playable maps, notably by reintroducing Cobblestone, while others would like a little more freshness, with maps that have never been part of the competitive map pool. In any case, CSGO maps are always carefully monitored by Valve.
LEGO Star Wars: The Skywalker Saga shows new images and gives us an appointment in early 2022 ❯

add a comment of CSGO: The most popular cards of the first half of 2022 revealed