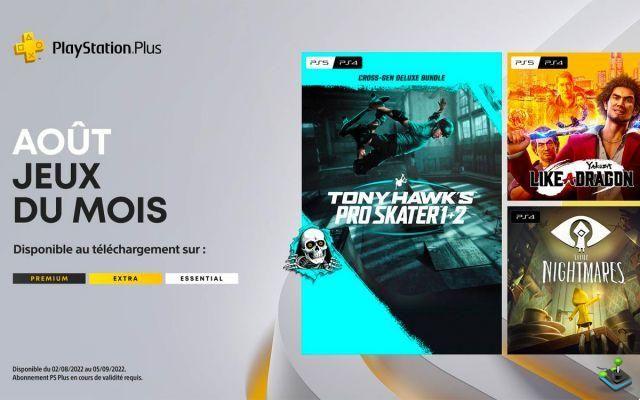 At the end of each month, PlayStation makes an official announcement as to the next selection of PS Plus games on offer. Thus, this Wednesday, July 27, the company has unveiled the titles that will be offered free to all PS Plus subscribers for the month of August 2022, via a post on the official PlayStation Twitter account and via an article on the PlayStation Blog site. Without further ado, here is what awaits you.

Developed by Vicarious Visions and published by Activision, the remake Tony Hawk's Pro Skater 1 + 2 first released on PS4, PC, and Xbox One in late 2020. Later ports including PS5, Xbox Series, and Nintendo Switch arrived. This remake offers players the opportunity to go through all the levels, present in the first two Tony Hawk's games, and also has a multiplayer mode. Not to mention, a skatepark editor.

Tony Hawk's Pro Skater 1 +2 will thus be available for free, according to its PS5 and PS4 version (cross-gen bundle), as part of the PS Plus games for the month of August.

Yakuza: Like a Dragon will thus be available for free, according to its PS5 and PS4 version, as part of the PS Plus games for the month of August.

Considered a platform and puzzle game, Little Nightmares, developed by Tarsier Studios and published by Bandai Namco, was released in 2017 on PC, PS4, Xbox One and Nintendo Switch. This adventure invites players to embody a little girl, named Six, who finds herself on board a large and gloomy ship and who is desperate to escape. But nothing will be easy.

Little Nightmares will thus be available for free, according to its PS4 version, as part of the PS Plus games for the month of August.

add a comment of PS Plus August 2022: Free games revealed