PS Plus Extra & Premium: All games for the month of September 2022 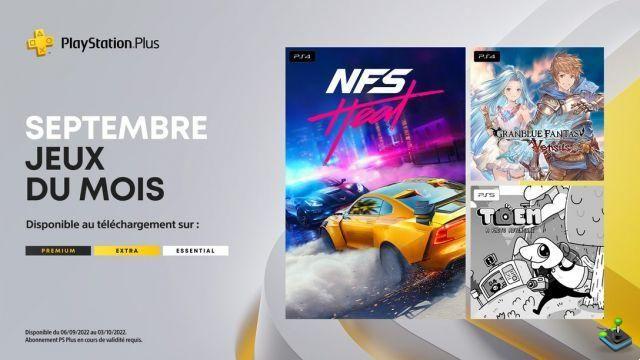 As you probably already know, PlayStation launched its new PlayStation Plus formula this year. Thus, now, the service has three subscriptions, with various advantages. Those who have opted for the PS Plus Extra or Premium subscription have, in particular, access to a catalog of games, which is renewed every month.

Incidentally, PlayStation has just announced thetitles that will be entering the PS Plus Extra & Premium catalog in September.

From September 20, all players with an active subscription to PS Plus Extra or PS Plus Premium will be able to discover new PS4 and PS5 titles. Without further ado, discover the complete list, which was notably revealed in a recent article on the PlayStation Blog site:
In addition, on September 20 also, the PS Plus Premium catalog will be enhanced with several games, called "classic" :


The PlayStation Plus Essential Games of the Month 𝗘𝗧 September Extra/Premium Games Catalog have been revealed!


– PlayStation France (@PlayStationFR) August 31, 2022 Finally, remember that the games offered PS Plus for this month of September 2022 were announced at the same time. We told you about it in a dedicated article.
Pet Master Free Spins December 20, 2022 ❯

add a comment of PS Plus Extra & Premium: All games for the month of September 2022