Whoever said you can't capture joy has clearly never played Super Mario 3D World. It's one of those rare games that distills the essence of fun, and now more people than ever can experience it with Super Mario 3D World + Bowser's Fury on Nintendo Switch.

While 3D World holds up just as well, if not better, on the Switch, Bowser Fury is the part you need to keep an eye on. This little spin-off mode could be (read: it's hopefully) the future of 3D Mario.

Both are great on their own, but together they're essential for any Switch owner.

Super Mario 3D World and Bowser Fury Review: The Best of Both Worlds 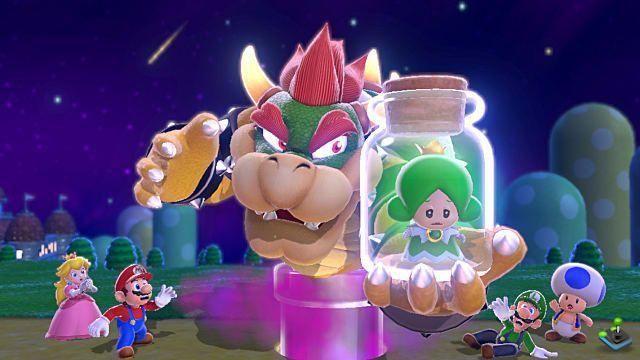 Mario 3D World starts with Bowser, as it should. As Mario, Luigi, Peach, and Toad walk along on a beautiful evening, a clear pipe rises. A Sprixie comes out, followed closely by Bowser with a kidnapping on his mind and a Sprixie-sized pot in his claws.

What is a Sprixie? Who knows. Mario 3D World doesn't like exploring these newcomers to Mario's world, but kidnapping Sprixie is enough to land Mario and his friends down the pipe.

On the other side of this transparent pipe is the Sprixie Kingdom, a series of eight worlds plus four bonus areas. It's the setting for Nintendo's most distinct approach to Mario creations.

3D World presents each course on a Super Mario World / SMB3 style map. They feature the usual themes we've come to expect from Mario games over the years, including ice, rocky heights, desert, and more, but from there Nintendo completely flips the motif.

These steps trade uniformity for the unexpected. You're just as likely to find a fall waterfall area in the ice world or a green plain scene in the desert world, as Nintendo is more concerned with tossing around as many design ideas than sticking with it. to tradition.

There's a Galaxy-style carnival stage, a level that cuts the clock to 30 seconds, a whole world of castles – there's almost no way to properly categorize 3D World's levels. While that makes it hard to talk about how Mario 3D World plays, suffice it to say it translates into an incredibly fun experience where you never know what to expect. 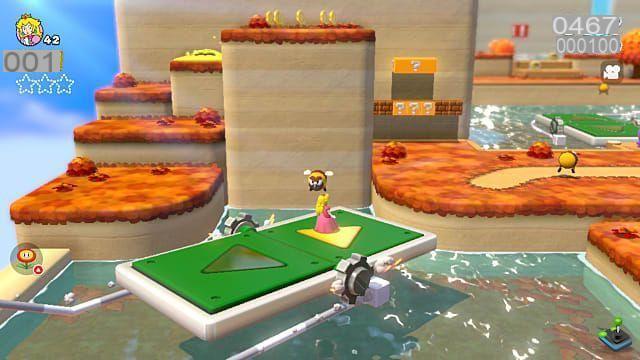 The early stages feel a bit pedestrian and simple, but it's hard not to have fun even with these seemingly basic levels, as 3D World's unique design approach means you can break the usual laws of 2D platforming .

Massive walls normally meant to block your way become avenues through a stage and are likely hiding a fun secret or two thanks to 3D World's new sense of verticality. Turning a corner in a side-scrolling tamed segment reveals a 3D race through platforms and lines of falling enemies, and that doesn't even take into account 3D World's top boss stages.

Later locales increase complexity. Some offer the challenge of getting all three green stars and a collectible stamp. Still others present an even greater cocktail of creativity. It's a non-stop parade of the smartest level designs Nintendo has ever given us.

Imagine Mario's greatest moments – the “Jump Up” segment in New Donk City or grabbing the Tanooki Leaf for the first time – spread across 12 worlds, and you'll get an idea of ​​what it's like to play Mario 3D World . It might not have a few "wows!" moments like his 3D counterparts, but it's an homage to everything that makes Mario so iconic and really just a joy to be around. 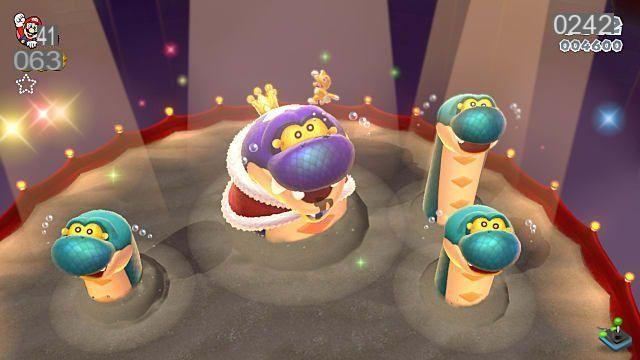 This love also extends to the smallest details.

Cat Mario, Toad and the others don't just crawl. They strut around like the proud cats they are, accompanied by adorable little pitter-patter steps that “plink” even on metal. Luigi shouts “It’s Weegi time” when you choose him for a stage, and it’s hard to describe the whole thing as anything other than delicious.

This dedication to variety means some ideas miss landing, even if the stages themselves are fun. Some feel a little unnecessarily rushed, and some additions, like the stunning Double Cherry, absolutely deserve more screen time. Still, complaining that one or two wonderful mechanics get lost in the shuffling of a bunch of other equally wonderful mechanics is something I'm happy to live with.

A big feature of the Switch version is online multiplayer, although unfortunately I couldn't test that. Local co-op is as fun and chaotic as you'd expect, and while it doesn't necessarily add anything essential to the gameplay experience, it's a fun time.

3D World on Switch still includes the Captain Toad puzzle levels, where you guide the hapless, no-jump explorer to green stars with stage movement and rotation as the only tools for success. These are refreshing diversions from the main game and a pretty effective advertisement for the Captain Toad spin-off game. 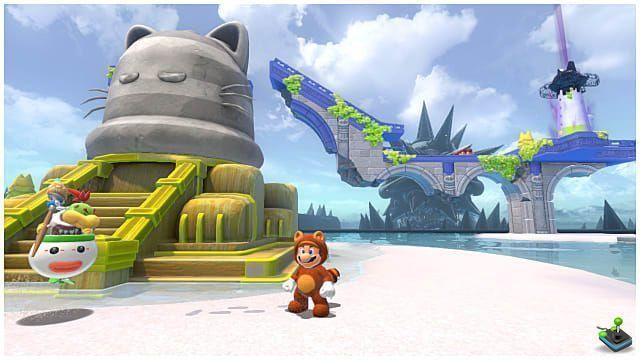 The other part of Mario 3D World on Switch is, of course, Bowser's Fury, a roughly 5-hour sideways mode that manages to be the best 3D Mario yet. Bowser's Fury has no story connection to 3D World - or anything, for that matter - and you can start it immediately after starting the game if you want.

Mario arrives at Lake Lapcat via an eerily familiar "M" graffiti to find something strange going on. The whole area is covered in mud, Bowser has swol, and only the power of the Giga Bell can contain him.

Bowser Jr. is here for the ride this time. He just wants his pappy to go back to normal and show up as an AI partner or player two, if you try multiplayer. The AI ​​is customizable, making Bowser Jr. either the perfect companion for players less familiar with 3D Mario games, or a silent tag when you want to advance on your own.

Lapcat Lake is split into multiple themed regions, each with multiple lighthouses that you need to activate through Cat Shines. Each lighthouse is in its own mini-region with multiple Cat Shines and five shards forming an additional Shine. 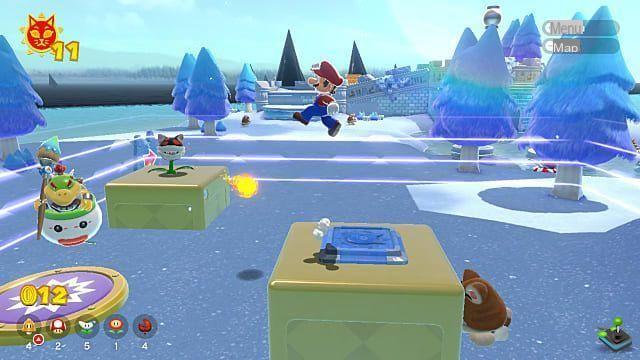 Granted, Bowser's Fury doesn't offer the endless buffet of creativity that Mario 3D World does. You'll recognize many gadgets shared between each mini-region, such as bouncing platforms and rotating metal grids.

Yet thanks to the seemingly limitless number of combinations Nintendo has created for the way they're all used, these mini-regions never feel stale or boring. There are plenty of additional challenges thrown into the mix for good measure, including some, like the Bully Challenge, that hark back to the classics.

The other part of what makes Bowser Fury feel fresh is how Side Mode approaches power-ups. Mario can store multiple power-ups - and more than one of each for the first time.

Giving each power-up a purpose beyond one or two specific instances is a small change with a big effect, giving Bowser's Fury a much-needed sense of immersion that I hope will also find its way into the future Mario games.

The whole of Lapcat Lake feels the same. Chaining a series of platforming challenges together should feel forced or arbitrary, but it's the exact opposite. 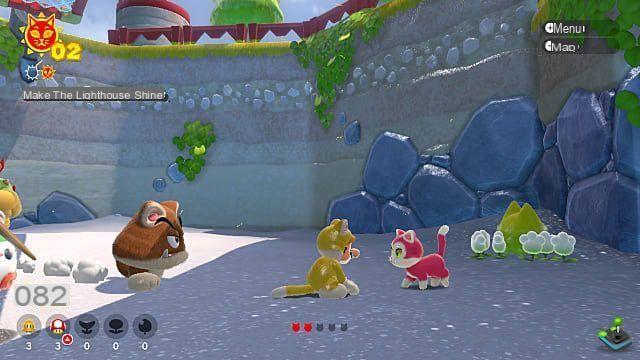 There's no empty filler space like some other 3D Mario games - and most other open-world games - so it's the best of both worlds: an entire set's worth of materials squeezed together without sacrificing the expansive feel of exploring an open world.

Bowser Fury obviously wouldn't be complete without Bowser, although there's a little less to point out here. Bowser's periodic invasions with flames of death and lava rains make King Koopa a bigger threat than he has been since the days of the NES. Seeing Super Saiyan Cat Mario never gets old, but Giga Bell's fights are mostly just oversized versions of traditional Bowser fights.

And that's fine. Bowser Fury gave me so much more than I expected. 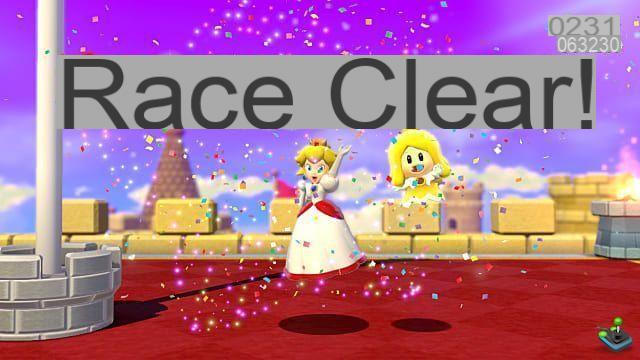 Super Mario 3D World may be almost eight years old, but time hasn't dulled this cat's claws. It's always a joy to play, with a range of delectable designs that never fail to impress. This is made more evident with the Switch's slightly faster speed.

And while Bowser Fury is short, it's packed with potential for Mario's future, making it the most readily recommended port and repack of the Switch's lifecycle so far.