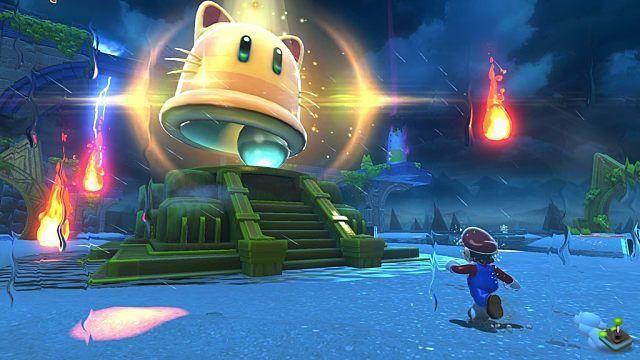 The latest Super Mario 3D World + Bowser Fury trailer shows Bowser out of control and Mario must up his game to tame the massive threat.

Mario must collect cat versions of Shine Sprites to activate the large cat bell in the center of the island because Bowser is Godzilla-sized and ready to destroy the world. Only Super Cat Super Mario can stop it.

Bowser's Fury takes place in what feels like a medium-sized open-world sandbox, with multiple themed regions to explore and dozens of platforming challenges to overcome.

But Mario will not be alone in all this. Bowser Jr. is on board, wielding his Super Mario Sunshine brush to help Mario.

Nintendo hasn't said if Bowser Jr. is a non-playable character or if a second player can participate in a co-op game of Bowser Fury. Given the new inclusion of online multiplayer for Mario 3D World, we'd be surprised if co-op wasn't an option in Bowser's Fury.