Author and references
Krampus made his debut in Warzone with the year-end event, Festive Fervor. It can be very interesting to find it to kill it, but it looks very difficult. The terrible Krampus landed on Caldera for the holiday season. The folk creature is obviously not the most peaceful and won't hesitate to attack players. However, they can kill him and walk away with a very nice, permanent reward. It is therefore worth trying to face it before the end of the year on Warzone.

Where to find Krampus in Warzone?

First of all, be aware that there are no specific locations as such for Krampus. Nevertheless, you can very quickly come face to face with this terrible monster by doing a little thing or two. As you noticed, Christmas trees have come to spruce up the battle royale island and, if you stick around for a while, Krampus will come to you. If, in one of the chests that arrives thanks to your presence near the fir tree, you find coal, then Krampus will be after you faster. Note that these fir trees are visible on the map and the mini-map.

As soon as he is in the area, sound and visual effects signal his presence. All you have to do is attack it and, above all, try not to die.

How to beat Krampus in Warzone?

You will notice it very quickly, Krampus is very robust. A charger won't be enough to put him down. We therefore advise you to equip yourself, all the members of the squad, with automatic weapons and to have a good number of ammunition on you, since it will be necessary to unload several chargers before seeing it be definitively beaten. You will have to knock him down four times to defeat him, which makes him a particularly powerful threat.

You can also try to lure him into an open area to get a better view of him and anticipate his movements. 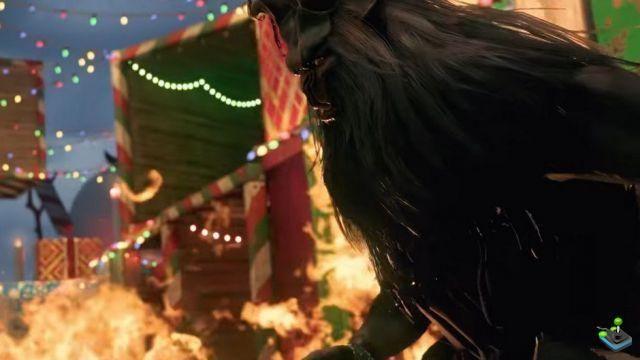 Considered too powerful by some players, it could be balanced, so that it no longer attacks players at the end of the game, for example.

Krampus is also present in Vanguard and will prey on players who are not objective-focused, or campers.
Audio Video Warzone: Krampus, where to find him and how to beat him?
Warzone: The best spawns to win the game ❯

add a comment of Warzone: Krampus, where to find him and how to beat him?