Game Awards 2022: One Steam Deck offered per minute during the ceremony

Author and references
On the night of Thursday 8 to Friday 9 December, the annual ceremony of Game Awards. In addition to rewarding certain productions, according to different categories, such as the best game of the year, we will have the opportunity to learn a little more about certain games already announced, but also to discover new titles, via the famous " World Premier”.

How to win a Steam Deck with The Game Awards?

If the event is already very popular, it could be that the 2022 version of the Game Awards will be even more so, in particular because Valve will please spectators, offering them a Steam Deck per minute, just that. Each viewer will have the chance to get the latest Valve console during the ceremony, provided they have registered beforehand on the official website. All you have to do is log in with your Steam and click on the "Register now" box to be eligible. 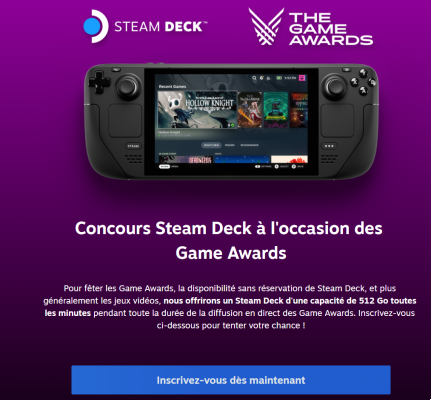 Then, meet at 2 a.m. on December 8 to try to win a Steam Deck. However, only viewers on Steam are eligible (and reside in the United States, Canada, United Kingdom or European Union). If you follow the event via Twitch, you will not be able to win the portable console. 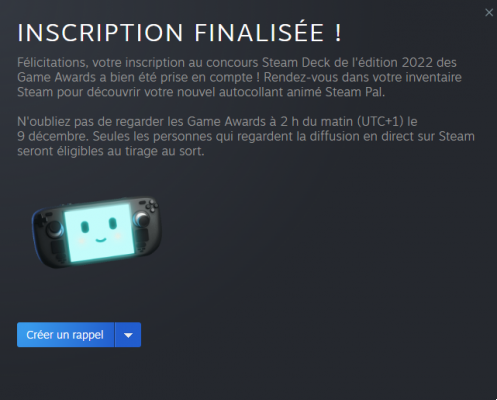 Going back to the event, you can already find out about all the nominated chans in each category, but also vote for your favorite games. Then, it will be necessary to wait for the event to discover the winners, and the announcements, during the two hours planned for the ceremony. We will not fail to keep you informed.
WoW Dragonflight Confirms 2022 Release, Pre-Orders Open ❯

add a comment of Game Awards 2022: One Steam Deck offered per minute during the ceremony