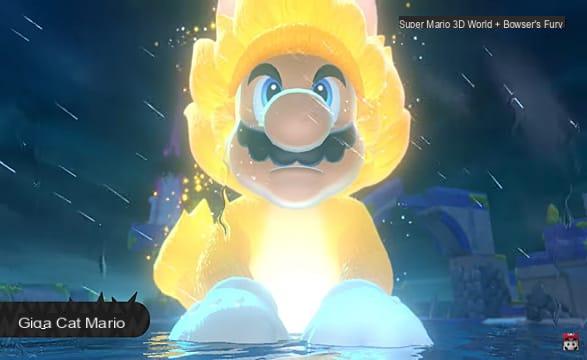 Nintendo has released another new Super Mario 3D World + Bowser Fury trailer on the heels of yesterday's look at the game. This one offers a deeper look at what to expect from the Wii U port when its release in February, including Bowser Fury's co-op game.

The new Mario 3D World trailer included additional information about Bowser's Fury. The new area is Lake Lapcat, a separate part of the Kingdom of Sprixie, and Plessie, the happy plesiosaur, is back to ferry Mario around the huge open sandbox stage. This time, however, Plessie is master of land and water, roaming the lands and taking out enemies along the way.

But the biggest feature is King Koopa himself. Occasionally, Fury Bowser appears and wreaks havoc around Lake Lapcat for a while. Mario must collect enough Cat Shines to activate the Giga Bell and become Super Mario Saiyan Giga Cat Mario to challenge Bowser in the ultimate battle.

Prior to that, much of the trailer highlights Super Mario 3D World itself, but here's the recap for those who haven't played the Wii U original.

Bowser is back and kidnaps the princess, but this time it's the princess(es) of the Kingdom of Sprixie. Like Super Mario Bros. 2, Princess Peach is one of four playable characters with Mario, Luigi, and Toad rounding out the pack.

The Super Bell that transforms Mario and Co. in chats is just one of the many bonuses in Mario 3D World. Tanooki's classic leaf and fireball also make an appearance, along with the double cherry that creates an extra Mario (or anyone) to tackle obstacles.

Mario 3D World on Switch brings back photo mode and, in addition to several filters, includes the Wii U Mii Stamps that players can use to set the stage for their ideal photos.

Super Mario 3D World + Bowser's Fury releases February 12 on Nintendo Switch. A Cat Mario and Cat Peach amiibo are released on the same day, and using them grants Mario either a White Tanooki Leaf or a Random Power Up respectively.