Author and references
A few weeks ago, the rumors evoked a passage in free-to-play for PES 2022, rumors that have just been confirmed by Konami, which explains that the franchise will experience major changes with this new version. In addition to reviewing his name, to call himself only eFootball, many new features will arrive at the end of this year.

If we will have to wait a bit to see what the license will give formerly known as Pro Evolution Soccer and Winning Eleven, Konami has already shared the outline of these changes so that future players can get an overview of the objectives and what will be offered to them. With this transition to free-to-play, the idea is to retain players more easily, by supplying eFootball with content updates over the long term., while offering "the most precise and realistic gameplay to date" according to Seitaro Kimura, producer.

In terms of content, its arrival will take place in several stages, starting this fall. Initially, in early fall, we should see the game land with a very basic, demo-sensitive experience, with only local matches with a limited number of teams. Few weeks later, cross-play will be activated and more advanced game modes (career mode, online mode, etc.) which will be detailed in the coming weeks, will be playable. This winter, Konami plans to implement controller compatibility for mobiles, since eFootball will also be released on these platforms. The developers specify that certain modes will only be available by paying, but ensure that the gameplay will remain, whatever happens, balanced and will not have any pay-to-win element. 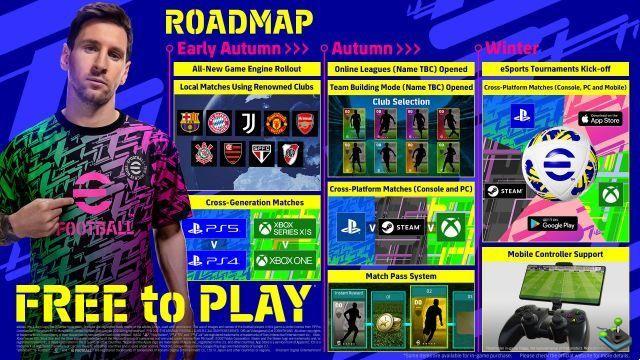 Finally, as we have seen in recent hours on social networks, Lionel Messi and Neymar Jr will be the ambassadors of eFootball, which will continue to be revealed over the weeks. Its release is scheduled for early fall, on PC, PS4, PS5, Xbox One, Series and mobiles.