The Division Heartland: Ubisoft announces free-to-play for 2022 at the latest

Author and references
The universe of The Division will drastically expand in the coming months. The franchise, which has 40 million players, will still host content on the second installment, released in March 2019, in addition to a film, produced by Netflix with Jessica Chastain and Jake Gyllenhaal in the main roles. If we already knew all this, Ubisoft has just indicated that it wants to expand the universe even more, in particular with Heartland.

The project is being developed at Red Storm Entertainment, which is "closely tied" to the French publisher. If the details are very meager for the moment, we know all the same that The Division Heartland is an independent experience from the first two games and will arrive in free-to-play at the earliest at the end of 2021, at the latest the following year.. Ubisoft did not want to give too specific a release window, to avoid disappointing future players in the event of a postponement. Regarding its platforms, it is announced that it will be released on PC and consoles, without specifying whether the two generations are concerned.

In addition, Ubisoft also announces that it wants to bring the franchise to mobile, the goal being to make his universe known to more players. We will probably have more information on all of this during E3 2021, especially for The division heartland, with, perhaps, a first image. In the meantime, the studio has shared a roadmap, so the community knows what projects the studio is working on. 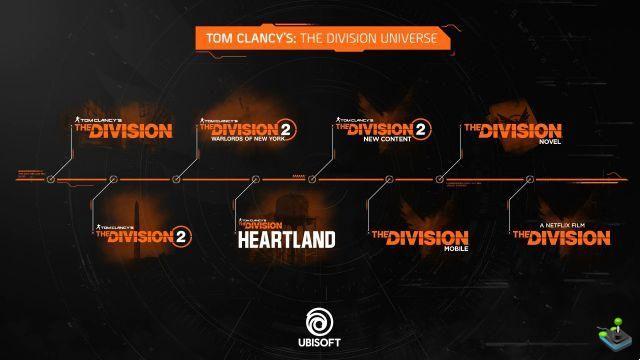 add a comment of The Division Heartland: Ubisoft announces free-to-play for 2022 at the latest